Making the most of department efficiency

At our 2015 Rotamap March event we analysed five different departments who have taken an innovative step to help improve their performance.

Departmental performance is often overlooked in favour or measurements based on a per-person or per-trust basis. There is mounting pressure on departments across the NHS due to: increases in additional work for payment; a drive for greater flexibility of working; the reduction in available training sessions; and greater scrutiny of productivity and supporting time. The increasingly flexible nature of most departments has also presented its own managerial headache as departments must manage the flow and usage of their flexible resources.

In the 2014 BBC Reith lectures Dr Atul Gawande identified that one of the biggest challenges facing global healthcare was the ability to create systems to co-ordinate effective working. It is not enough for trusts to look at consultant productivity alone to determine their effectiveness, instead trusts must analyse departmental performance to better understand the services they provide.

Below are five example departments each with a different approach to working. For each department data can be used as a guide to help guide and manage their service as well as monitor productivity.

Department 1 runs a rota where all the theatre lists are unallocated from an anaesthetic prospective. Each of the consultants has a fixed number of flexible sessions that can be worked across the week. Availability and SPA time is managed by consultants informing the department administrative team of when they are unable to work. A weekly tracker is kept to allow consultants to shift sessions between weeks if and when the department needs.

The resulting benefit of this approach is the department is able to provide a much more consistent number of sessions on a week-to-week basis, especially when compared to other hospitals of a similar size. The consistency in delivery can be easily seen my looking at the departments stacking graph of activity.

Fig 1. Department line graph comparisons. Department 1 is the middle chart, its overall activity is much flatter than the other two similarly sized departments.

An analysis of the department's capacity shows that they have an average of 96% session cover. This means, that after leave the department should still have enough staff to be able to cover 96% of its planned activity. A average of 96% is extremely high amongst other departments using CLWRota.

Fig 2. Example of a capacity report for Department 1.

This close match between supply and demand revealed in the department's capacity figures as well as the consistent throughout of sessions shown in the line graph can also be seen in the following chart which shows the expected activity of the department against the actual completed activity. 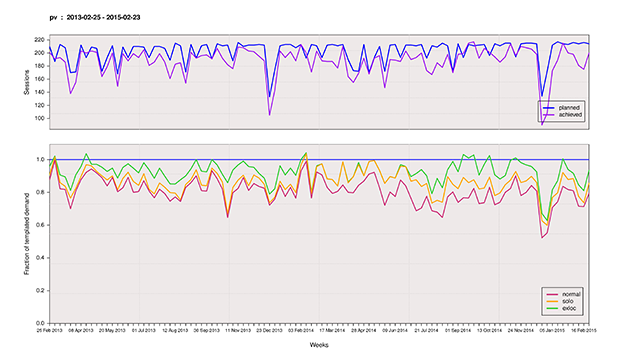 The main drawback of this approach is the extra administrative oversight required to run the rota and track sessions. However, it is clear that this has offered the department beneficial results. The department often has to start setting up the rota quite far ahead of the week but is able to publish the rota a week ahead with incredible consistency.

Fig 4. Graph to show the number of weeks out the rota was setup and published.

In this department they no longer count the annual leave taken but focus on the number of sessions delivered. Using the 42 week rule each consultant has an annualised delivery target for clinical activity. Every quarter the department audits the performance data and is able to address issues with anyone falling outside of 5% of their expected sessions. To further help the department and to allow better utilisation of sessions everyone has a degree of flexibility built into their job plan.

The department makes use of the Rota Management Console (RotaMC) to continual monitor the number of sessions worked against the annualised expected figure. RotaMC can show at a glance how people are performing against a pro-rata (year-to-date) target of expected sessions. It is important to ensure that no one is falling behind or over exceeding their target. Over exceeding the target can also become a problem, if a person uses up their sessions too soon it could leave the department short at the end of the year.

In order to manage having enough staff in on any given day the department have been divided into sub groups for general, cardiac, nuero, paeds, ITU, trauma and staff grades.

Although when speaking to the department they estimate they have enough staff to cover 90% of their activity. A capacity report from CLWRota suggests cover is only around 80%, which is incredibly low. Hampered by a lack of consultant cover the department is reliant on paying for a large number of extra sessions. 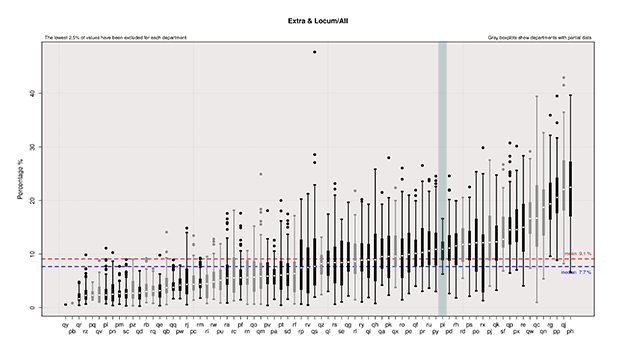 Making use of the data to show the productivity of the consultant cohort and the impact of the lack in consultant cover, the department has been able to secure funding for six new substantive consultant posts. Ahead of appointment the funding has been released by the trust to help pay the extra session payments.

One of the major issues to tackle was the alignment of the job plan year (April - March) with individual's leave years. The department has taken the view that as the consultant contract indicates a minimum of 42 weeks of service should be delivered in a year this is the primary target and how leave falls should not affect this.

To facilitate better theatre planning the weekly theatre scheduling meeting is chaired by the anaesthetic consultant rota master. Individual surgical departments are no longer involved in the theatre planning process.

Planning meetings take place at six weeks prior to the rota week. At each meeting surgical specialities identify their lost lists and aim to find internal cover. At four weeks another meeting is held where any remaining fallow lists are offered out across the directorate. Two weeks before the rota week the diary is closed to further changes. The locations report in CLWRota will provide a snapshot of late changes, by displaying the percentage of changes after the publication of the rota broken down by surgical speciality.

In order to keep things well run the trust previously employed a strict regime where surgical specialities that left lists go fallow were penalised by not allowing them to pick up any additional work after three successive late changes. As a result hardly any theatre time goes to waste and if a list does go down at the last minute it is often re-purposed to see additional trauma patients. The department only uses a very low number of extra sessions and is able to use them very consistently. As seen in the below p-chart, all the values fall within the 3 standard error range.

The department pays close attention to individual performance. The clinical director tracks and records the sessions delivered across the year by each of the consultants and holds quarterly meetings with all members of the team where performance is a vital part of the discussion. Particular attention is given to those consultants whose performance falls outside of one standard deviation of the department average. 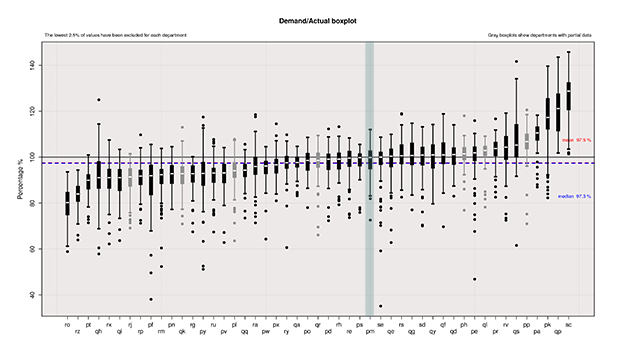 We introduced a new benchmark report at the March 2015 event. The above chart shows the percentage of sessions achieved over those expected. So a department to the right of the chart is working more sessions than are being templated and a department to the left doing less sessions than templated, possibly as a result of cancellations. A department which achieves 100% of its activity is being well managed. Also important in indicating a well managed department is the variance (the spread of the box). A department with a low variance achieves a consistent usage of sessions.

Department 4: Increased use of annual contracts

The department introduced the use of annualised flexible sessions (Flexible In Year) in April 2010 when the Trust reduced the rate for additional sessions by more than half with only 24 hours notice. In order to maintain a degree a flexibility a new plan was needed and two concepts were introduced: paybacks (worked sessions in return for lieu leave) and flexible in year sessions being added into job plans at job plan reviews and the recruitment of new posts.

Fig 10. Department heat map showing where the majority of extra sessions fell over the course of the week.

Payback sessions were recorded on the rota as an extra type and the time take back is monitored by the department. This can be done using the time shifting leave report which can be sent to departments on a weekly or monthly basis.

Consultants often prefer to cover additional sessions by the payback method as it builds up their leave entitlement, however, the drawback for the department is that it only shifts the need for greater capacity. This is somewhat mitigated by ensuring the payback sessions are taken within a rolling 12 month period. Avoiding the build up of excessive amounts of time owing.

This approach is more controversial than the others and will depend a lot on the number of trainees the department supports and their range of grades. Not all departments will be able to use their trainees to provide elements of service delivery.

The department also makes extensive use of its trainees to provide an element of service. Each trainee must work on a minimum of three supervised lists a week that form part of their training modules. Beyond these important training lists the trainees can work at other points in the week and be available to the department to provide service. Based on our benchmarking data the department makes use of 2% more trainee led lists than the average and is using 4-5% less additional paid sessions than the average. It fairs even better when compared with other departments that are similarly matched to it in terms of size. 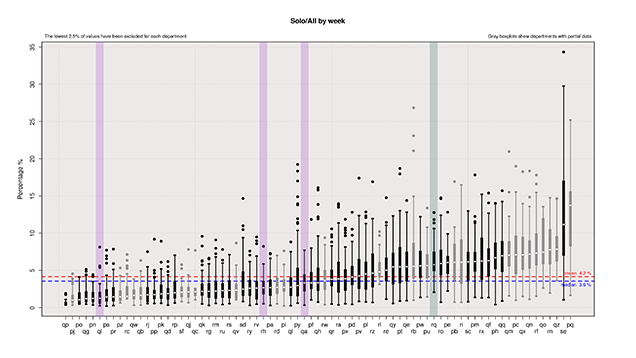 Each week the rota is designed with allocating the three training lists first and once this is done the gaps in service are filled up with trainees. To ensure this use of trainees does not begin to affect the training the department makes extensive use of the Trainee and College Tutor reports available in CLWRota. These reports show how much of a trainees activity is pent working supervised and on their training module requirement lists. The department also makes use of a weekly emailed training report which shows by trainee the percentage time spent working supervised and solo. 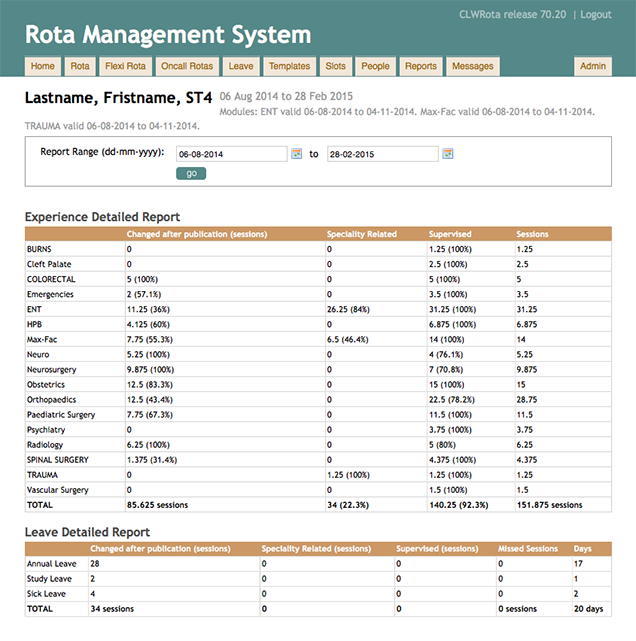 The department also benefits from a monthly automated report on the number of lists done by each of the trainees and the percentage split between solo lists and supervised lists.

Departments can make use of the data available to them: from the in system reports, via our automated weekly or monthly reports; and from the biannual benchmarking data to help analyse their performance. The data is there to help reveal some of the areas departments might be able to improve on, the capacity report can indicate if sessions are understaffed and trainee and extra benchmarks show that there is too much or too little reliance on activity of a certain kind. Tracking the information coming out of the system on a regular basis can help monitor and maintain the department's service delivery.

As a guide we have proposed the following checklist of things to consider when thinking about departmental efficiency.