Data for the benchmark reports came from the CLWRota system together with session scoring information from an early release of our Rota Management Console. Each department's name has been replaced with a random two character code to maintain anonymity. 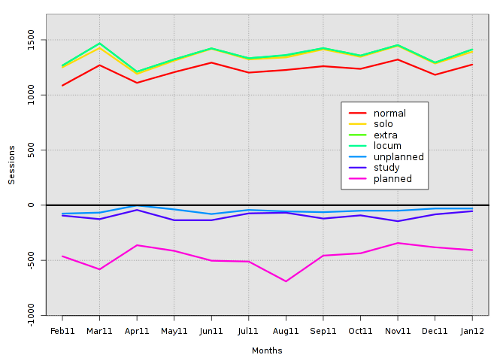 One department's activity for the year to February 2012

First, a set of graphs were shown of individual department activity. DCC activity of various types is stacked above the zero line, with leave shown below the zero line.

The department activity graph is useful for showing how various factors, such as trainee solo sessions or the extra & locum sessions, contribute to DCC session delivery. Variations in leave through the year can also be easily discerned, as can the balance of planned, unplanned (such as leave for sickness) and study/professional leave.

Few departments show a dip in activity in August 2011. The three bank holidays in April 2011 caused significant drops in activity across most departments. 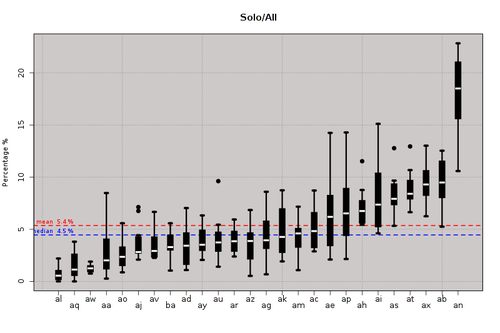 Trainee solo sessions as a proportion of all department activity

This benchmark shows trainee solo sessions (that is, trainee led sessions) as a proportion of all department activity. The boxplot shows the variation in results on a monthly basis for each department.

The mean solo session rate across the departments was 5.4%, with a median of 4.5%.

It should be noted that some departments with a high proportion of solo sessions have very good training records, and have used techniques such as mentoring locations or dedicated, "starred" consultants to monitor and support trainees working alone. 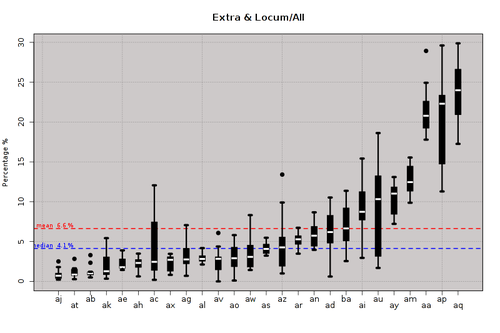 Paid-for extra activity as a proportion of all department activity 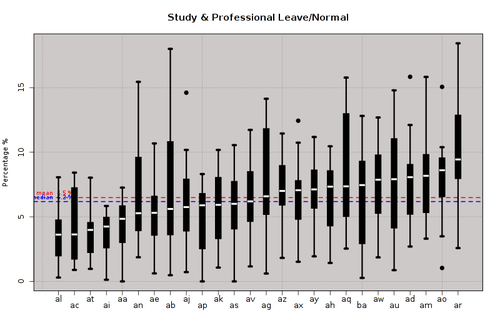 Study and professional leave as a proportion of normal activity.

Leave is accounted for on a missed session basis. Counting on this basis is only for leave when a consultant is expected to be working. 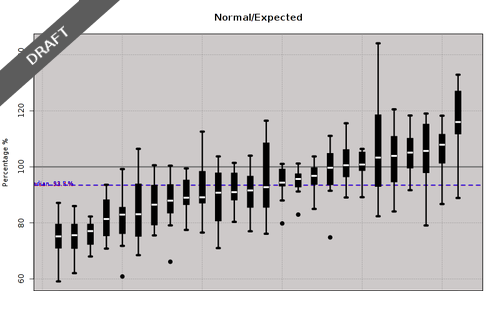 Part of the management console scoring exercise for the benchmark data was a process of determining anticipated activity for consultant and middle grade staff.

The determination of anticipated activity for a department is complicated by part-time workers or workers leaving part-way through the year whose anticipated activity could not be recalled. (These issues will be dealt with by version 2 of the Management Console.) The usefulness of this benchmark is also mitigated by the fact that that there is a wide range of anticipated weeks of activity by full time staff, from 38 weeks to 43 weeks, and differing policies about compensation for job-planned sessions falling on bank holidays.

As a consequence of these factors, this benchmark should be considered "Draft" status only. Despite its provisional nature, the benchmark does show that about a third of departments meet or exceed their anticipated DCC sessional activity.