At the 2014 CLWRota Forum the department statistics and cross-departmental benchmarks where presented by Dr Mark Cox of Chelsea & Westminster Hospital and Dr Jason Wilson of Imperial College Healthcare.

Client departments are provided with detailed benchmark reports covering their activity over the preceding year or two years and how this compares to the CLWRota cohort.

We plotted the mean value of various indices from the benchmark data over the last six events to see if any trends emerged.

As can be seen from the data the mean of extra usage of a proportion of total department activity has risen sharply over the last three years. In the same period the proportion of solo sessions (trainee-led lists) has slightly declined. 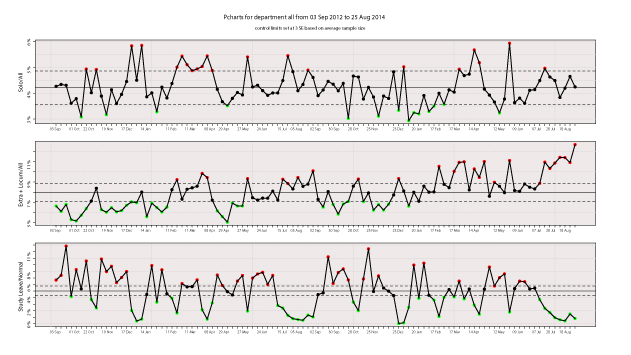 The top chart shows solo session usage; the middle, extra usage; with study and professional leave at the bottom. The data shows that many departments have an increasing reliance on extra sessions.

We have improved our line charts to now display as weekly charts so there are a lot more plot points and also to show the proportion of activity done by staff working as flexible in week and flexible in year by shading in an area underneath the normal consultant delivered sessions. This should help departments who are moving to more flexible working gauge what proportion of activity is being done this way.

A particular focus of our data analysis is the usage of trainees.

Below is our usual cross-departmental box plot of the proportion of solo sessions (trainee led lists) over the total department activity. 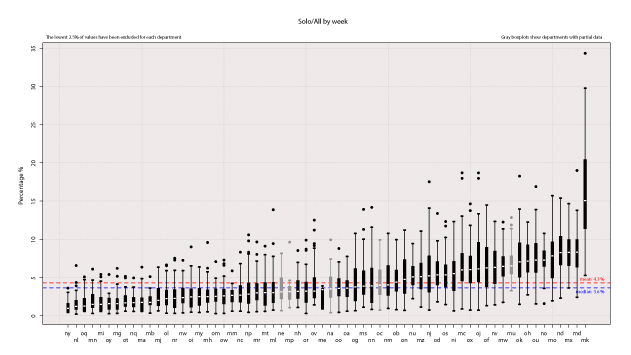 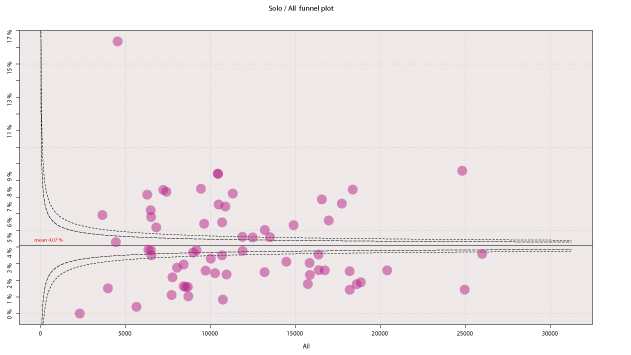 The funnel plot shows that department size does not correlate to the proportion of solo lists. There is no discernable correlation between the size of a department and its use of trainee-led lists.

A plot of the standard deviation of solo lists against department size was used to determine if larger departments have a greater or lesser variability in the number of trainee led lists on a week-to-week basis. 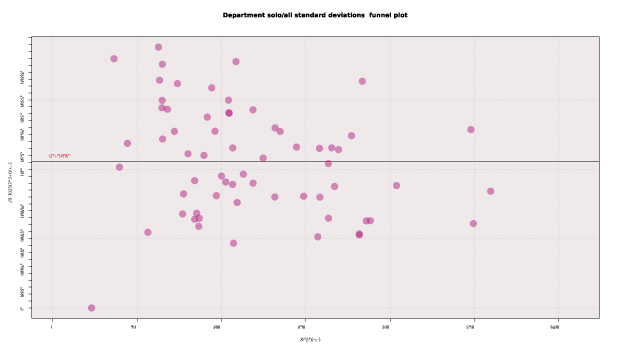 The result of this analysis shows that the size of a department does not correspond to greater or lesser variability. This conclusion was not expected as it was considered likely that larger teaching hospitals would offer a more stable proportion of solo and supervised lists to trainees.

Analysis in this area is designed to assist departments in understanding the make-up of their service delivery. 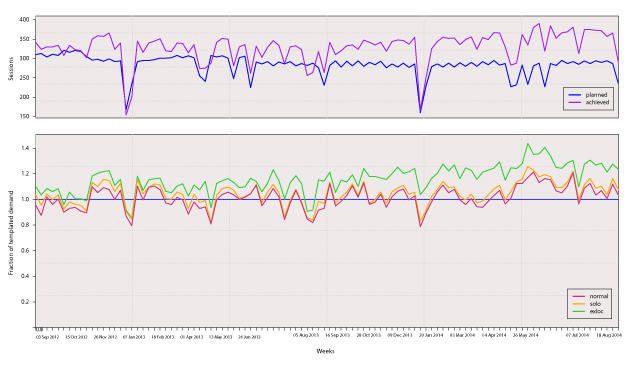 The department above shows an increase in the amount of activity over the two year period. In the first 12 months activity achieved (the purple line) was slightly above planned (the blue line) but over the second 12 months the gap has broadened and achieved activity is now significantly higher than planned. The bottom half of the chart reveals that most of the planned activity (the fixed blue line) is made up by normal consultant delivered sessions (the red line) and the extra activity is largely being done by trainees as solo sessions and as paid for extra activity (the green line).